The rudder is another one of those pieces that was mostly built early in the project and has been laying around for months, if not years. Rough cut out and fitted to set the location of the gudgeons and the height of the till quite a while ago, it’s finally time to finish it up.

The blade of the rudder is designed to kick up when beaching or hitting an obstruction underwater. When I was in Texas sailing Peter’s boat, I found it was a perfect depth sounder. As soon as the blade struck bottom up it popped to let me know it was time to find deeper water.

It made sense to build a strong rudder because of the abuse it will take. The first two laminations were of bubinga which is as hard as a woodpecker.s lips. Southern yellow pine and white oak made up the rest. The blank was cut to shape and then taken outside to have an airfoil section cut into it.

The angle grinder with a 40 grit sanding disk made short work of the rough shape with the fine tuning being done with a hand plane and sander.

A total of four coats of 6 oz boat cloth was applied. Three layers of cloth over the entire blade and then one strip of tape over the leading edge for just a little more protection. 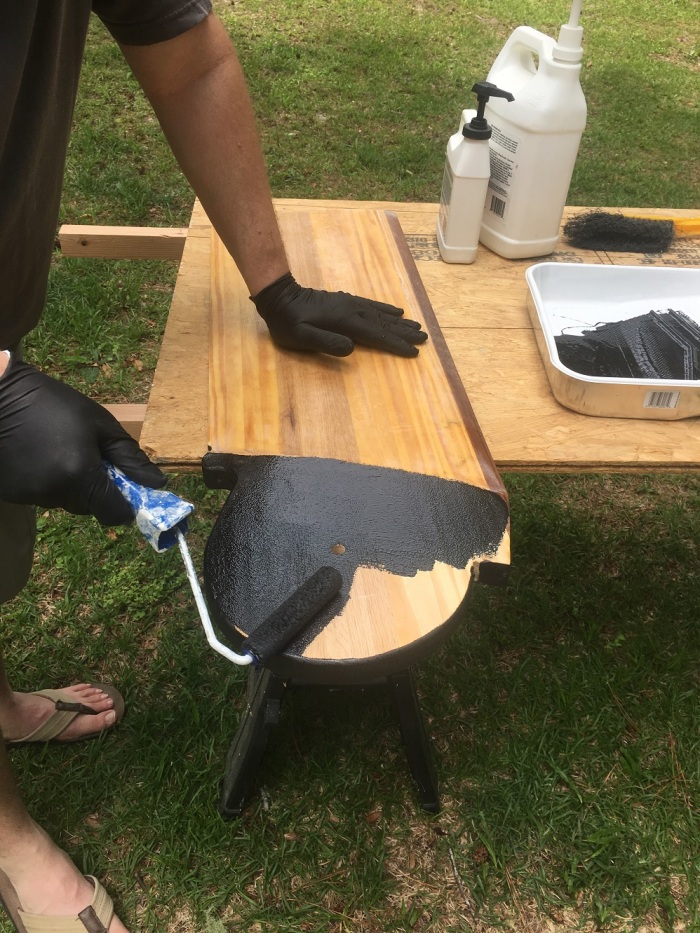 Some of you will recognize what is going on here if you have been reading articles on Duckworks Magazine. This is epoxy mixed with a graphite powder. Small boat folks have been using this for everything from a damage resistant bottom coat to a low friction coating for sliding surfaces. I figured it would work well to protect the rudder blade from friction damage. Three coats total were applied to the blade and two to the inside of the rudder stock. Finally it was time to varnish.

The end result turned out pretty good. The initial fit of the rudder inside the stock is tight but workable with natural wear and tear loosening it up over time.

I had reached a pretty big milestone with the rudder completed – there was nothing left to build, sand, paint, or varnish. All of the parts were done. As they say in southeast Georgia, “all I lack is finishing up”. Four and a half years of building lay scattered around the shop. The boat is on its cradle and the masts, booms and gaff slung from the ceiling. The motor was on a stand in the corner ready to go after having its break in runs done. Looking around I realized there was only one thing to do, set a date: September 22, 2019. See you there.

4 thoughts on “Odds and Ends: The Rudder”